Started in 2016 by Tulbagh resident of 11 years, Rod Buchanan, this boutique craft brewery produces an exclusive range of small-batch, hand-crafted beers of various styles.  Rod is an optometrist by profession but got tired of selling people things they needed but didn’t want.  Passionate about good beer and realising that it was generally hard to find, Rod decided to live out his passion by starting his own microbrewery where he could experiment and innovate and ultimately create beers that he enjoyed.  It just so happened that a lot of other people liked his recipes too and very soon Buchanan’s developed a reputation for producing beers with unique flavours and robust characters. Rod is, to this day, involved in every aspect of the brewing process to ensure the personal touch and care that are prerequisites for craft beers of distinction.

Buchanan’s is not about going big and attempting to become everything to everyone. This would mean a loss of that personal touch, resulting in the generic characterless beers that are so ubiquitous nowadays. But perhaps more importantly, it would take all the fun out of making beer where there is a distinct difference, for brewers like Rod, in brewing for a living and living to brew!

BREWED WITH PASSION & CRAFTED WITH CARE 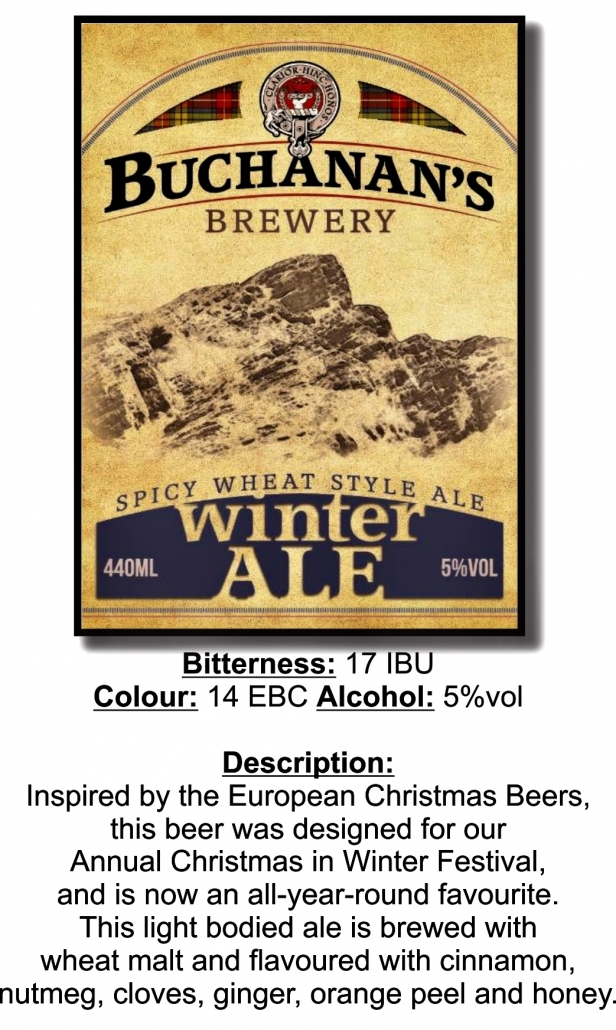 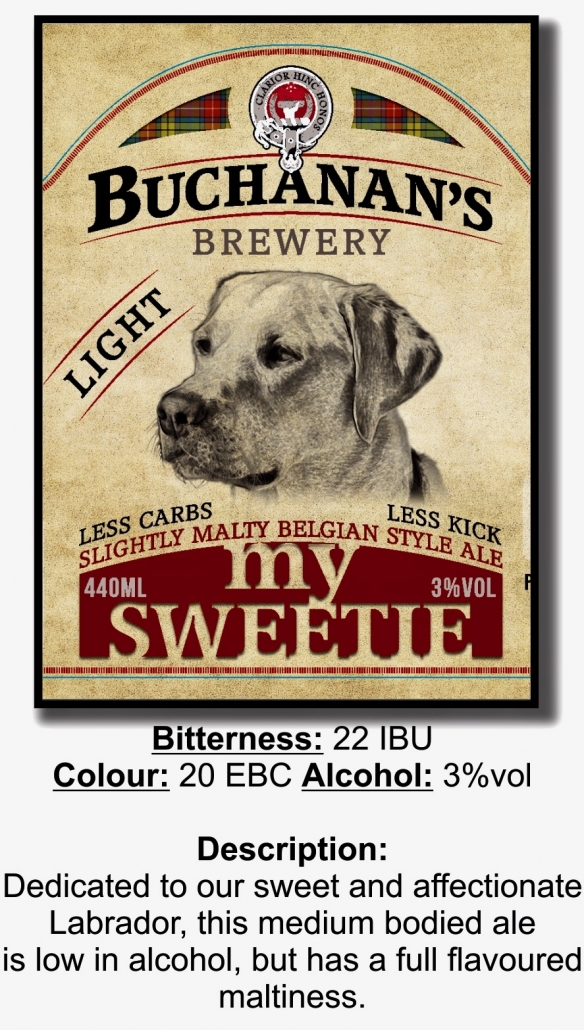 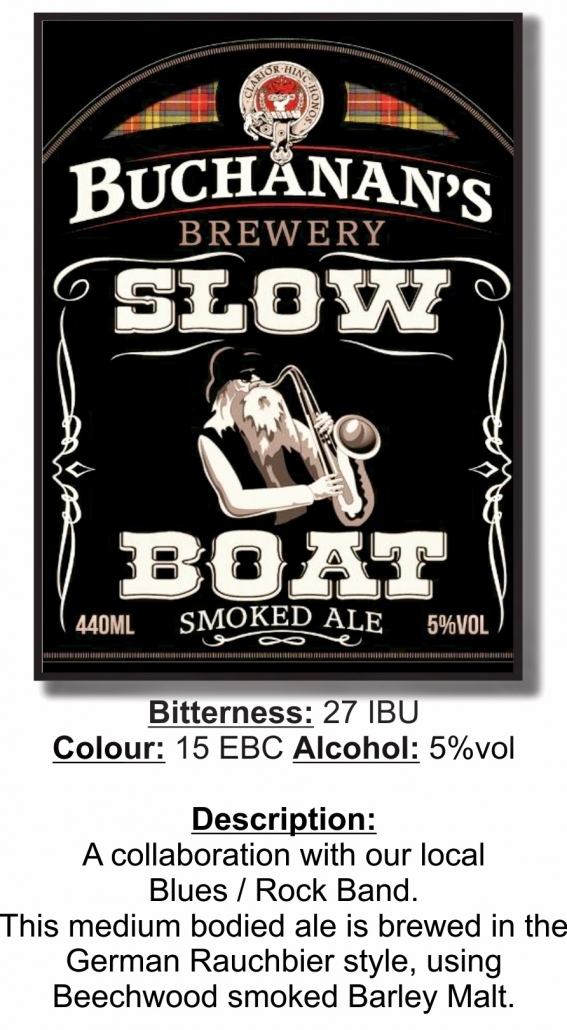 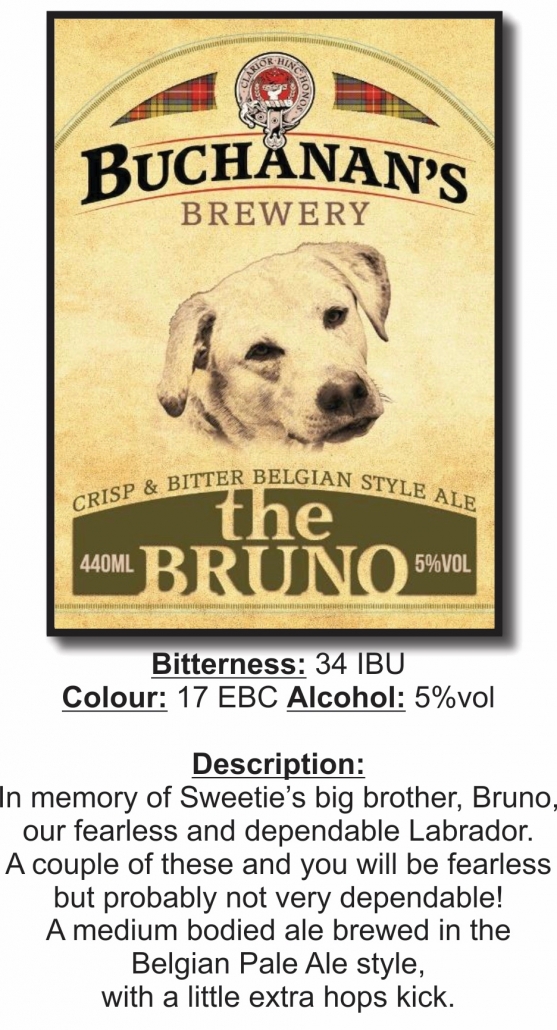 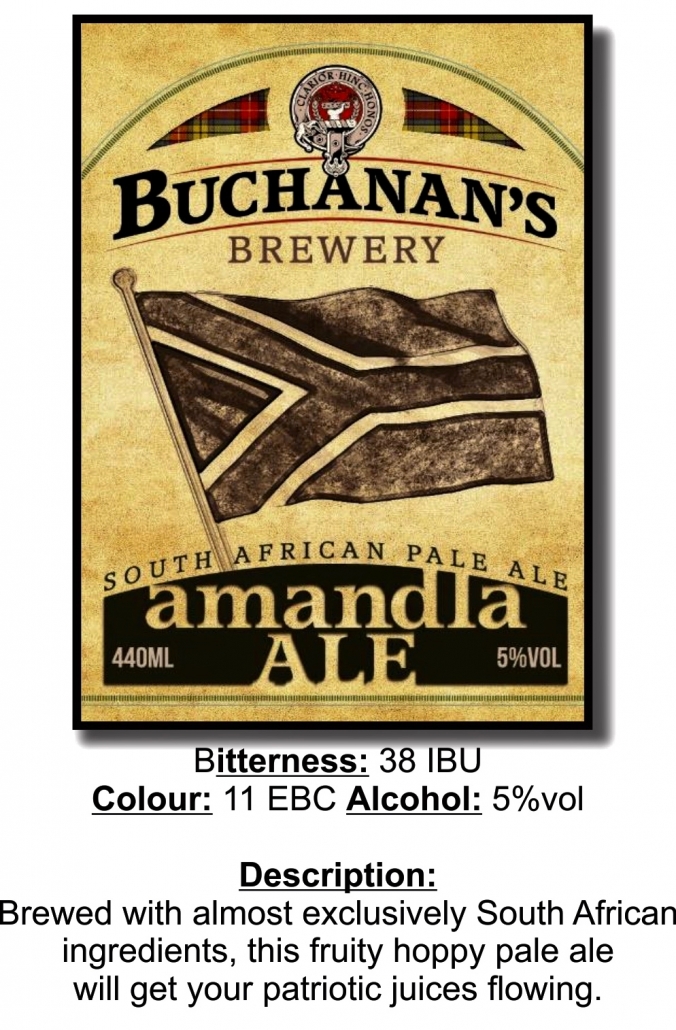 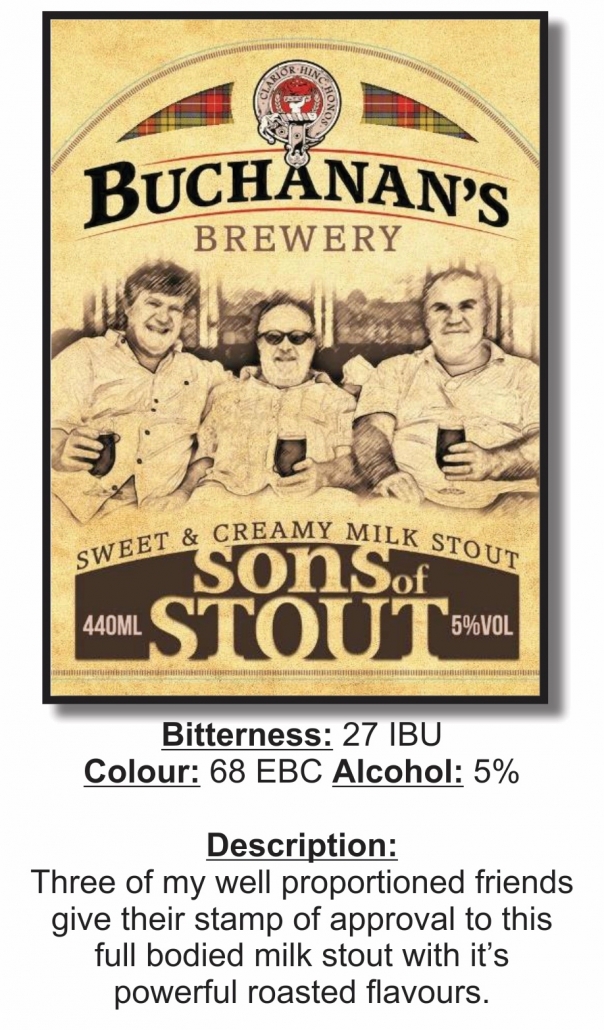 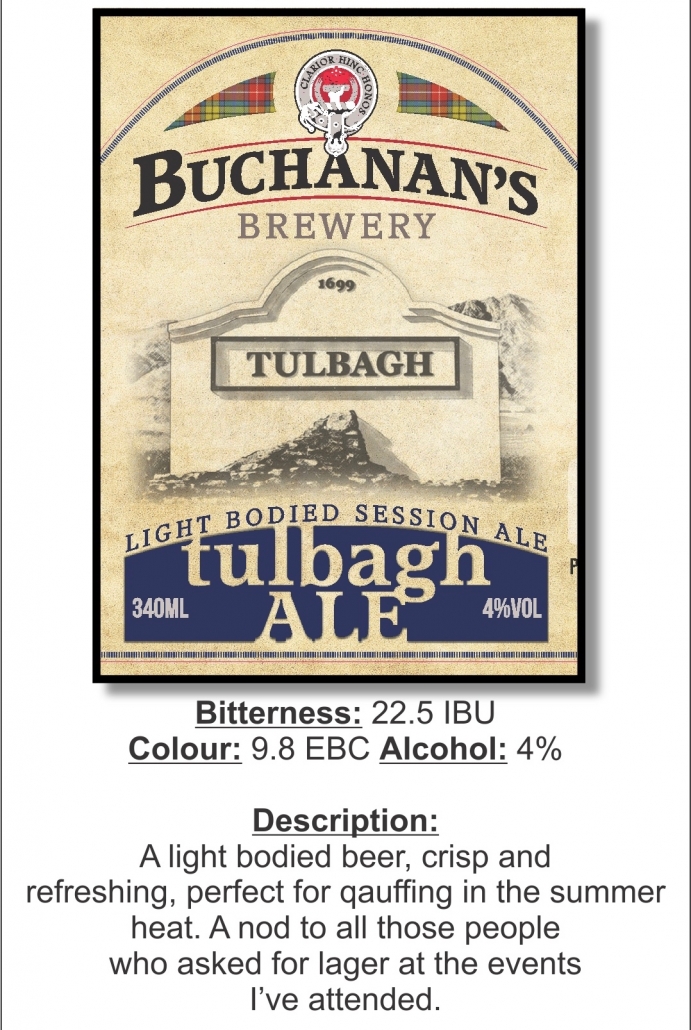 The Carnaby Family have, as of March 2021, partnered with Rod and brought the Buchanan’s Brand & Tasting Room to its new home at Duikersdrift. They share his philosophy in every respect. The emphasis has always been, and will remain, on producing memorable beers of exceptional quality.  Why not come and give them a try for yourself?!  If around and not brewing, Rod will happily provide details on the creation of the range OR he can host your tasting by appointment.

IT’S ALL IN THE NAME

Like wines, the vast range of beers available cater to a diversity of differing consumer tastes and preferences.  Based on output, breweries are classified as follows:

Micro-breweries: smaller, independently-owned breweries with small production outputs.  Medium batch every day or every other day.

Although the term craft-brewery is often used to describe any brewery that is not a large commercial (macro) brewery, it is more correctly defined as a micro-brewery that has ramped up production but when brewing their flagship beers must use traditional ingredients, such as malts, barley, water, yeast, and hops. Adjuncts such as rice and corn may only be used for flavour-profile purposes and not cost-cutting purposes as is the case with big macro-breweries.

When you get down to it, there are really only two distinct classes of beer, namely Ales and Lagers.

There is often much debate as to the differences between the two, and this too can be misleading with a fair amount of myth.

It really all comes down to:

Production: Uses the same yeast as bakers use for bread, namely Saccharomyces cerevisiae, providing a tell-tale historical link between brewers and bakers.  It is the oldest form of beer brewing that traditionally took place at room temperature in summer.  Most ales ferment in the range of 16–24°C.  Warm temperatures lead to faster yeast activity with the result that ale brewing is a faster process than brewing of lagers – making ales perfect for home brewers or nano-breweries.  Because the yeast multiplies rapidly at this temperature to devour the sugars throughout the mashed liquid (wort) during fermentation, the liquid churns rapidly to develop a fluffy foam head (kräusen) on the surface which has led to the misplaced belief that only top fermentation occurs.  In reality, and in common with lager brewing, fermentation occurs throughout the fermentation tank and much of the yeast settles at the bottom.  Ales are generally not cold-stored (cold-conditioned / cold-aged) for a period after primary fermentation and therefore tend to be hazy rather than clear.

Profile: tend to have a fruitier, sweeter, fuller-bodied and more robust and complex flavour profile than lagers. They also generally have a higher alcohol content, with greater bitterness and a stronger hop flavour.

Production: Use Saccharomyces pastorianus which first evolved as a cold-adapted hybrid between S. cerevisiae and S. eubayanus in Bavaria in the 16th Century to enable brewing in winter, after a decree banned summer brewing.  It is therefore not as old a process as ale brewing and arose purely because a new law forbid brewing in summer. Cold temperatures lead to more sluggish yeast activity with the result that lager brewing is a longer process than brewing of ales. Most lagers ferment in the range of 7–13°C but it is possible at ale temperatures. As far as the belief that lagers differ from ales by being bottom fermented, lager yeast behave in the same way as ale yeasts by fermenting throughout the tank but they just do so at a much more sedate pace because of the lower temperature with the result that the foamy head (kräusen) is much less pronounced, leading observers to believe that bottom fermentation is occurring. The word lager derives from ‘lagern’, a German word meaning ‘to store’ and was used to describe beers in 19th Century Bavaria that were cold-stored for a period after primary fermentation in an effort to improve clarity (allowing time for yeast, hops and other material to settle) and flavour – thus the terms cold-conditioning / cold-aging / lagering phase are applied.  To this day, the practice is mostly associated with lager production but does occur in some ales as well.  Lagers therefore tend to be clearer than ales which can be hazy.

Profile: lagers tend to have a very clean and crisp taste and are generally lighter, less complex and milder-tasting (easier to drink) than ales.

Most of the ubiquitous lagers commercially available from macro-breweries are pale lagers. Dark lagers are mainly found in Germany, Italy and eastern Europe.

Hoppy – describes how bitter a beer tastes which depends on when the hops are added in the brewing process. The earlier the hops are added, the more bitter the beer. Hops have a versatile flavour & aroma that enhances floral and fruity flavours in beer.

Bitter – denoted by an IBU (International Bitterness Unit) number. The higher the IBU, the stronger the bitterness.

Malty – malt comes from the barley grain, and it is usually roasted before it is added to the brew. Roasting barley gives beer a nutty flavour and toasty aroma. During roasting, sugars in barley caramelize, bringing out a slightly sweet, caramel taste.

Dark (taste & colour) – describes beers where the malt is roasted until it reaches a dark colour so they are typically roasted longer than malty beers, giving them a richer and heavier taste with notes of chocolate and coffee.

Light – describes a low alcohol beer with a clean and crisp, refreshing taste with a subtle flavour and minimal bitterness.

THE PERFECT PARTNER TO VIRTUALLY ANY MEAL

If you really want to get the most out of your beer and food pairing, these guidelines may prove useful depending on what you wish to achieve with the pairing. In general, avoid pairing subtle meals or beers with partners exhibiting extremely powerful taste profiles.

Contrasting – the primary rule here is that one member of the pairing must not overpower the flavour profile of its partner, but must be of equal strength in a contrasting flavour in order for the meal or beer to shine in its own profile. Strong beers require meals with strong flavour profiles while the opposite is also true.  Salty or spicy meals pair well with a dark, full-flavoured bitter beer whereas sweeter flavoured meals require malty, sweet beers.

Complementary – again, the primary rule here is that one member of the pairing must not overpower the flavour profile of its partner, but must be of equal strength with a similar flavour.  Match rich foods with beers that have a heavy and rich flavour, like stouts or porters, while light meals such as salads and fish dishes and even desserts do best with light beers or wheat beers.

Cleanser – this is different to complementary in that the beer or meal is used to ‘remove or lessen’ the flavour of the partner and therefore serves as a palate cleanser. This type of pairing is ideal for dishes or beers that have strong or overpowering flavours, like very bitter beer or spicy food. Cool and refreshing light beer washes down the heat without neutralising the flavour of the food while fatty foods such as chips / fries or nuts cut through the bitterness of an IPA.

So, when looking to pair your chosen meal with beer, herewith a quick recommendation guide……

Light lagers: because they have such a refreshing flavour, they’re ideal for pairing with spicy dishes, but you can pair these beers with just about any type of food – they are the universal companion.   Try with chicken wings, salty chips / fries, fast-food like burgers and hot dogs, noodle dishes, salads and fried fish.

Wheat beers: are brewed with a mixture of wheat and barley grains, which gives the beer smoother texture and lighter carbonation than other styles. The wheat itself doesn’t add much flavour, so many brewers add citrus and other fruity flavourings to the beer. Goes well with spicy and tangy food (Mexican, Thai, Vietnamese, etc).  Also a great companion for fruity desserts and pastries.

India pale ales (IPAs): these are one of the most popular styles of beer and typically have a medium amber colour and very bitter flavour due to the amount of hops used to stabilise the beer for longer shelf-life. To make the bitterness more palatable, many brewers add citrus or herbal tones to the beer.  In addition to standard IPAs, there are also double IPAs, which are made with even more hops and have a strong bitter taste.  Great with braai meats (ribs, steak, chops), chips and Mexican food.

Amber ales: are characterized by medium mouth-feel and colours that range from amber to a deep reddish-gold. These beers have a strong malt and sweet caramel taste but they are not overpoweringly, with many having a dry and crisp finish which makes them ideal as palate cleansers to rid your mouth of strong flavours.  Ideal with lighter meals such as pulled pork, roasts, pizza and fried food.

Dark lagers: are made with roasted malts with a nutty flavour and many have caramel syrup added to slightly sweeten the beer. Lighter lagers have a global following whereas darker lagers where malt is roasted more are popular in Europe where they are an excellent complement to traditional European dishes.  Good with aromatic sausage and meats, stews, burgers and pizza.

Brown ales: aren’t as hoppy or bitter as other medium-coloured beers, and instead have hints of chocolate and coffee similar to stouts and porters. Additionally, English varieties of brown ales usually have a dry and nutty taste. Beer experts and craft-brewers tend to turn their noses up at brown ales because they lack the extreme flavours and bitter hoppiness that is fashionable nowadays, but these are tasty beers that are versatile and able to be paired with many different foods.  They are especially good with roasted pork, sausages, braai meats, fish and even sushi.

Stouts: are best known for their black colour and dark, silky-smooth consistency and roasted flavour characterised by strong hints of chocolate and coffee. Despite appearance, stouts are not necessarily high in alcohol content or sharp in bitterness and taste and there are many mild stouts.  The chocolate flavour and generally low alcohol content make for a perfect pairing for many darker, richer desserts such as cakes, puddings, truffles, and mousses but it also goes well with stronger-flavoured meats such as duck and game, and shellfish such as oysters, crayfish and prawns.

TAKE BUCHANAN’S HOME WITH YOU

*All prices are VAT inclusive.  Shipping is excluded.

No off sales on Sundays, Good Friday and Christmas Day

Please call us to discuss larger orders and shipping.

WHEN CAN YOU VISIT

Due to small production volumes of our hand-crafted beers, tastings may be limited* but are available as follows:

Tastings are informal and on a first-come, first-served basis. 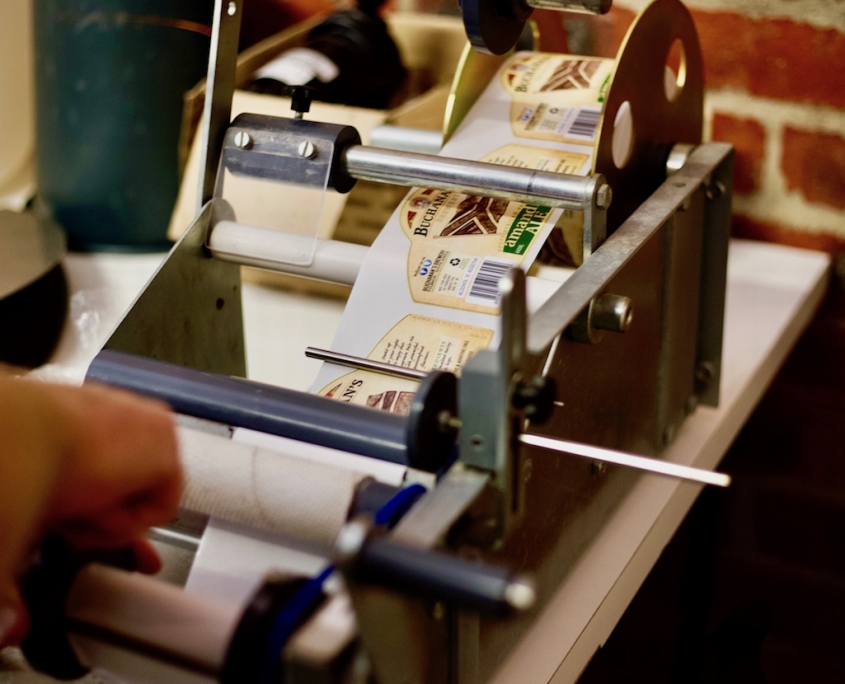 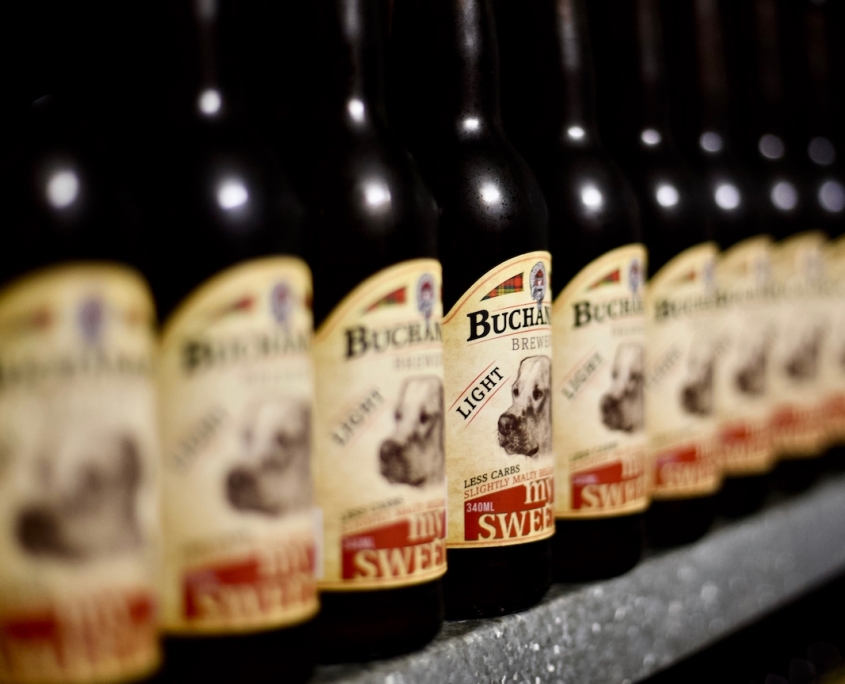